The duty of the Grand Vice President for Communications (GVPC) shall be to edit and manage the publication of a journal devoted to the Fraternity known as The Communicator of Phi Delta Chi. This journal shall be published at least three times annually, and an amount determined by the Executive Council shall be collected from each Collegiate Chapter to finance the publication of this journal. 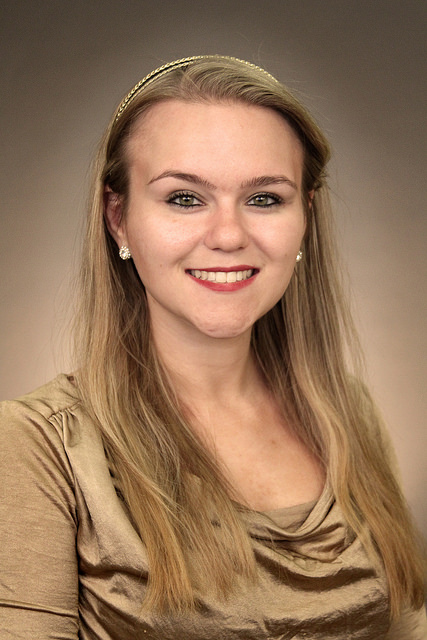 Emma was born and raised in Arlington, Texas but headed north to complete her pharmacy training at Southwestern Oklahoma State University (SWOSU) in Weatherford, OK. During her first semester at SWOSU in 2012 as a pre-pharmacy student, Emma was initiated as an Alpha Omega Brother. She first served on the publication committee where she assisted in producing the chapter annual publication “The Stimulator.” She was then elected as the Worthy Prelate and served for two years where she led the chapter publication, was in charge of the social media platforms, and assisted in hosting the 2014 Southcentral Regional Conference. Emma served as the Worthy Chief Counselor for her final year on campus before completing her fourth-year rotations.

Emma has attended numerous Southcentral Regional Conferences and Grand Councils throughout the years and has served on various committees. She was appointed as the first Southcentral Regional Director for Communications in the summer of 2017 where she worked hand in hand with the current Grand Vice President for Communications, created and publishes the regional electronic publication (e-communicator) - THE SC SCOOP – monthly, and created the position of chapter communication liaison. This new role served as the lead contact from each chapter to report news, accomplishments, and events for each regional newsletter. In 2019, Emma was appointed for another term as the Southcentral Regional Director for Communications where she continued to consistently produce monthly issues of THE SC SCOOP.

After graduation in 2018, Emma completed her PGY1 Community Residency at Med-World Pharmacy in Sapulpa, Oklahoma. Emma currently serves as the Clinical Services Pharmacist at both Med-World Pharmacy and Apothecary Pharmacy. She is the Independent Pharmacy Ownership Residency Site Coordinator as well as a preceptor for P1 & P4 students. Emma enjoys supporting and performing in theatre productions, creating soothing TikToks (@sweetemmarph), playing video games on PS4 and Switch, cuddling cats, and traveling to explore new places with her friends and boyfriend/Brother AJ.